While creating a chipset that uses a non ep-8k33a memory standard may possibly cause issues with large OEM purchasers who might want to give it a miss until the standard is ratified, the enthusiasts among us have long been running DDR memory modules at DD speeds so the chipset was greeted with open arms for the most part. The KT’s main advantage over KTA besides the little memory controller tweaks is the ability to run the memory clocks asynchronous to the front side bus, in this case with a This continues, at least on the motherboard in this review, all the way up to MHz front side bus where it becomes impossible to run asynchronously from the front side bus speed.

At MHz and above, your memory clock will match the front side bus speed. Of course you are also free to run your ep-8ka3 synchronously and indeed this can possibly be advantageous since running asynchrously increases memory latency on a DDR memory subsystem. On a DDR system, matching memory clock to CPU host clock front side bus is ideal and latency can be as low as possible.

So on the test board at least, all front side bus frequencies from MHz to MHz let you run the memory clock synchronous or After that, memory clock must mnual host clock. This might change in the future since manjal mainly BIOS controlled from what I understand and DDR MHz memory is starting to appear in small ep-8,3a and is already available from DDR sticks if you know what you are buying and do your homework!

As far as the board itself goes, it’s usual EPoX fare. Cheap, good expansion and lots of support for the enthusiast in terms of performance and overclocking features are what I expected and that’s exactly what I got. Lets take a look at the board spec. Up to 4 IDE devices. AGP supports 1x, 2x 3. I’m guessing the P80P module is expensive and it doesn’t appear on the regular 8K3A for cost reasons.

Would have been better to see it across both boards however. Apart from that, the board is quite fully featured. As it stands, the board supports good peripheral expansion with 6 bit PCI slots for all the add on cards you might add to your system. AC’97 audio via the southbridge is also supported however I’m a fan of proper hardware solutions since I’ve found VIA southbridge provided solutions tend to degrade under high system load whereas a dedicated solution tends not to.

So while the board might seem low on features, it’s strengths lie elsewhere.

Otherwise layout is identical. As always, lets start at the top left and work our way across and down. Starting in the top left area we have the main ATX power connector and the 3-phase power regulation circuitry and components that feed the CPU socket with power and in turn the rest of the board. The 3-phase power solution is said by EPoX to improve stability, especially in high speed situations when overclocked. They know enthusiasts run their boards out of spec and they know they are famous for boards that do so.

So they developed the 3-phase solution for some of their boards to assist the enthusiast when overclocking and also to provide overall stability at stock speeds. Moving to the right past that circuit and componentry we see the socket itself. It’s rotated, presumably in conjunction with the 3-phase power to shorten the trace length to the power pins on the socket. I’m not a fan of rotated sockets since I used to run water cooling and rotating the socket when moving motherboard meant rotating and repositioning the water block.

However with regular air coolers the socket rotation shouldn’t be an issue. The floppy and IDE connectors are placed, ideally for this reviewer at least, on the right hand vertical edge of the board and aligned vertically. Thumbs up to EPoX for that connector placement. The Northbridge is only passively cooled with no noisy fan which is a bonus. The KT Northbridge seems to run exceptionally cool. Running all the way up to MHz was possible on this board with no other cooling of the bridge required.

The heatsink does the job fine and remained cool to the touch at all times, even under load. Moving down past the passively cooled chip and we encounter very familiar territory. Everything from mmanual AGP slot downwards is where it should be. The ATX case header is also properly labelled, something you don’t see on all boards and I was able to connect my case headers msnual having to refer to the manual which is a nice rarity. Other manufacturers could take something from EPoX on that point since losing your motherboard manual isn’t hard to imagine.

The board uses a full 9-hole ATX mount and was an easy drop in replacement for the last board in the test kanual.

No issues with installation at all, as it should be. Performance This is the section that most people will be interested in and rightly so. There would be no point in VIA releasing a chipset that’s intended to replace the KTA if it didn’t offer increased performance in some areas leaving people with no incentive to buy a KT board.

Most focus on the chipset will be in the asynchronous memory mode where you run the board in So we’ll take a look at performance from a number of angles. Firstly we’ll look at overall system performance in both memory modes and then finally a quick look at some overclocking. A quick note about this board and an explanation as to why we haven’t reviewed it as soon as most.

We’ve had the board for a little while but we’ve never been able to make the board work in asynchronous mode and detect any performance increase. While the BIOS would tell us we were running asynchrously, none of our benchmarks would show us that was the case.

I was a bit hasty in releasing a review of the board where I could see no discernable difference in the two modes since other reviews had shown a difference and a chat with EPoX UK assured me the board did run asynchronous. So all the numbers you’ll see in this review were garnered using the 8k3a Performance results So we’ll be seeing results from 2 points with our graphs: These are going to show the same numbers that any well sorted Socket A board will show for the same processor, in our case the XP MHz.

Nothing to look at there. The numbers are very similar to results we’ve gotten with this CPU on a wide number of boards. I’ll skip the CPU Multimedia numbers except to say that there is a very small but detectable rise in the results when you go up to asynchronous mode. Onto the memory benchmark figures from Sandra.

It’s this graph that most people are going to see and think, “what’s the benefit of running DDR then? What Sandra is really measuring here is the bandwidth the host processor can make use of from what’s available from the memory controller.

Think about it like that and you see why the figures are so close together. 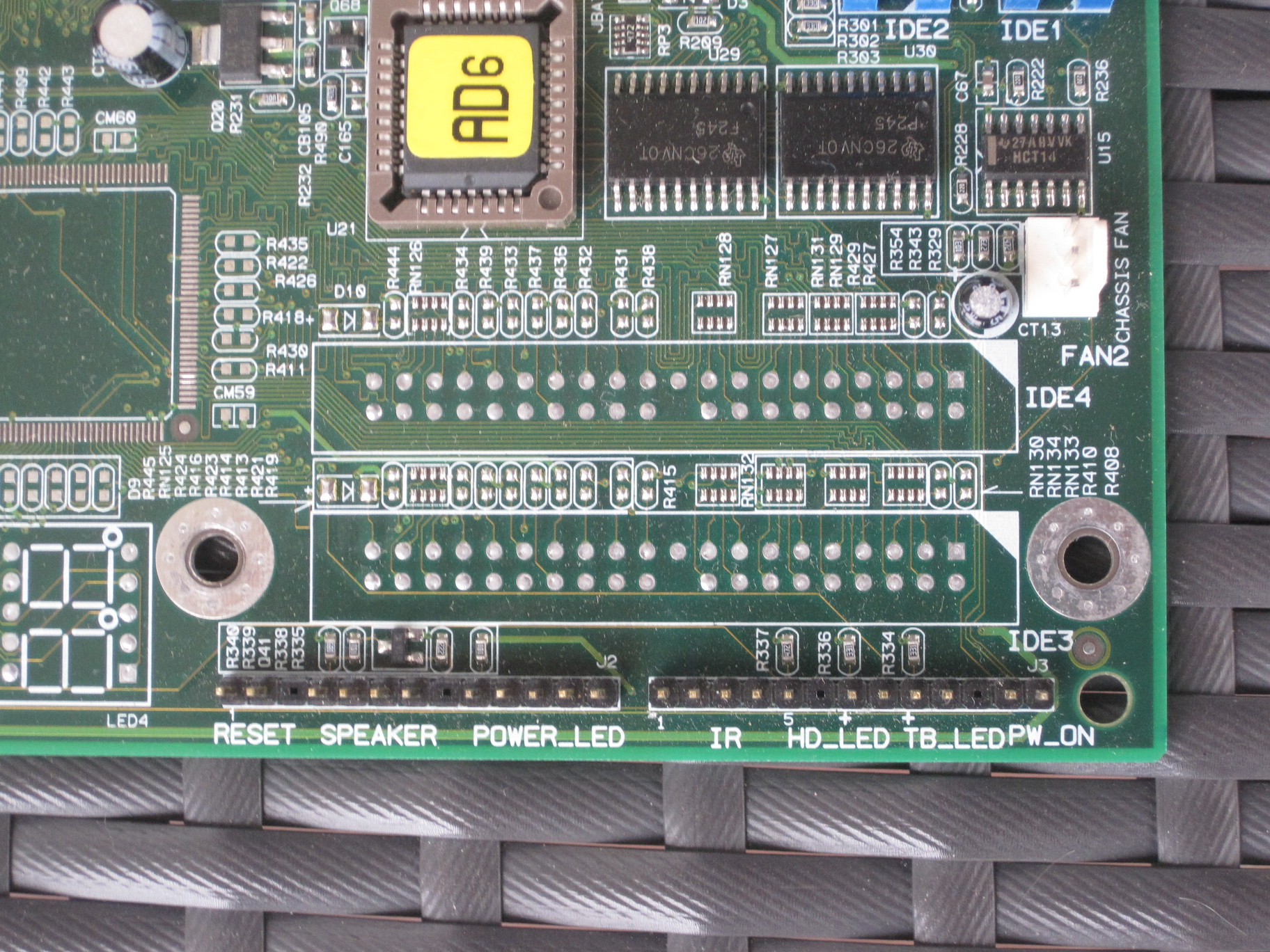 We’ll need to make use of other benchmarks to highlight the performance advantage that occurs. The graph just shows the CPU is working properly. Next up we have Quake3. Given a fast graphics card, you are able to see the effect that memory bandwidth has on the system when you use Quake3.

The fast graphics card allows you to remove it as a bottleneck in the system and leave other variables that influence system performance. In the following graph, all that is changed is the memory clock via a reboot. As you can see, running the memory bus at MHz ep-8l3a giving us the extra bandwidth shows us a slight but measureable performance increase. The effect isn’t pronounced you need a combination of extra bandwidth and an overclocked host bus to take proper advantage of it but the increase does have an effect.

At identical clocks, KT and hence the test board will be faster than KT Not by much, but measurable. A small but measurable increase in performance from the free memory bandwidth that we gain. A 60 point gain I measured over points from some runs doesn’t seem like very much but it happens every time showing you that the memory bandwidth we have extra from KT is helping performance.

Latency on DDR memory subsystems actually increases when you run asynchronous to the front side bus, negating some of the performance, but on the whole performance rises. We see that here and it’s as we expected. Onto Aquamark, our shader-heavy DirectX 8. Like before, a small but appreciable difference in performance is what we are looking for.

Lastly in our look at general performance we have Serious Sam: We’re looking for the same wp-8k3a here. More performance at stock clocks and our little increase when running asynchronous. Again, predictably, we get what we expected. The results are higher than any KTA results we’ve seen, although only by very small amounts which again highlights something we’ll touch on ep-k3a the ep-8m3a so keep reading. Also, our asynchrous runs show the little increase we need to validate the mode.

Onto the performance conclusion where we’ll also touch on some issues pertaining to the Athlon XP platform in general. VIA have tweaked the memory controller a little bit more since KTA the KT controller will appear in P4X soon so performance at the same clocks will increase by a small margin. The reason lies in the fact that the Athlon XP can’t make much direct use of the extra bandwidth. Sure it leaves some free for the rest of the system to utilise, but by and large the headroom doesn’t make much difference. Latency on the memory increases actually negating some of the new bandwidth performance you get. DDR memory is happiest running at the same clock as the host bus front side bus so that wait states between the two are minimised. That leads us nicely onto a general observation about the platform. It’s manyal obvious that Athlon XP could do with a front side bus hike to let it use more memory bandwidth. A move to MHz memory clock coupled with new DDR memory would give the platform ep-8l3a overall performance boost.

The CPU can use 2. The higher speed offsets some of the latency increase and everything moves a bit faster. Multipliers can be lowered and given a proper process shrink, the CPU has some headroom left in it for a while before Hammer hits.

AMD seems to have shot itself in the foot however mxnual not increasing front side majual clock or doing some of the other things to help out a lack of bandwidth like a large on die L2 cache. Speed will increase by multiplier only.

KT and in future, KT will give the system some more memory bandwidth as processor speed marches on but is it enough?

We’ll have to wait and see with the processors themselves but reliance on a MHz front side bus isn’t helping the platform as a jump to MHz would.